In the past, members of the Wins family have achieved positions of eminence in the diamond industry. They have served as managers and directors in the Central Selling Organization (CSO), sight holders for De Beers, committee members of the Diamond High Council (DHC), and advisors for the Diamond Cutting Technical Schools in Belgium and America. 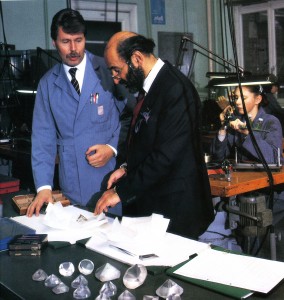 Mr. Hans Wins, younger brother of Mr. Leo Wins, resides at the Antwerp headquarters of De Beers. Hans Wins, in addition to being a keeper of the secrets of diamond cutting and a prestigious collector, is also a major personality in the diamond field.He has served as manager of Public Relations for De Beers in Antwerp, as well as a Committee Member for the DHC. As a part of his duties, he has met with important political figures from various countries.Hans Wins, a diamond historian of the industry, was one of the founders of the Provincial Diamond Museum in 1968 and supporter of educational projects as Chairman of the Diamond Committee of the Flemish Ministry of Education. He has been invited to many parts of the world as a keynote speaker, as he is one of the leading ambassadors for the diamond industry. 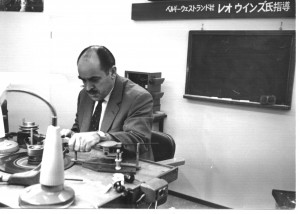 Mr. Leo Wins, a Master Diamond Cutter, carries on the tradition of four generations in diamond cutting. As was the role in traditional cutting families, he underwent many years of apprenticeship in order to learn all the branches of diamond cutting. He has since mastered the techniques of polishing, bruting, sawing, and cleaving.A former sight holder of the CSO, Mr. Leo Wins has served as a member of the Board of Diamond Cutting Technical Schools in Belgium. He is considered one among the fine diamond cutters in the world. It was for this reason that he was invited by Washington D.C. to serve as the diamond expert to help the accrediting commission for the only diamond cutting school in America.Mr.

Leo Wins was invited and his expertise was requested for joint ventures in both Manous, Brazil and Shanghai, China. Because of his extraordinary talent, his advice was often sought after by colleagues when larger, more rare and difficult stones were being cut. 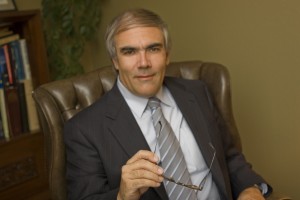 Mr. Guy Wins, is the fifth generation member of the Wins diamond family and currently heads the family business. In addition to attending law school at Brussels University, he has received specialized training in the diamond industry from his father, Mr. Leo Wins.In addition to his years of apprenticeship with his father, he was taught how to mark rough diamonds from the world's top expert, Louis Frank, who cut a diamond for Elizabeth Taylor-Burton as well as other rare and complex diamonds. While others were turned down despite their generous monetary offers, Mr. Guy Wins was privileged to be among the very few that were taught under the direction of this master. 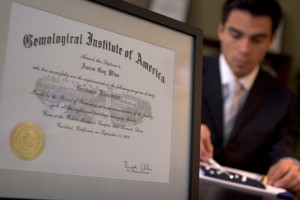 Mr. Aaron Wins, is the sixth generation member of the Wins diamond family. He is presently working with his father Guy Wins. He has graduated with a bachelor's degree in Business administration from Regis University. He also has followed the G.I.A. Graduate Diamonds Program and has successfully earned his Diamonds Diploma. He was also among the first class that learned how to grade diamonds with G.I.A.'s new "Cut" grading system. In addition to his G.I.A. training, he has been well schooled in many facets of the diamond industry by his grandfather Leo Wins. He has dealt and been exposed to some of the rarest diamonds in the world, including the 88 Carat Black African Star. He has spent time in Antwerp, Belgium with his uncle Hans Wins, where he was able to further educate himself on the history of diamonds and see the roots of his family's legacy. Aaron has also had the opportunity to appreciate different cultures while living in France and Spain, where he has become fluent in the French and Spanish language. Aaron is proud to continue the legacy set fourth by his family for more than 150 years.

His grandfather Leo laid the groundwork so that Aaron would carry on the Wins name for future generations to come. Aaron and his father Guy together are continuing to enrich their industry and international network with their impeccable reputation, rich history and their powerful story.